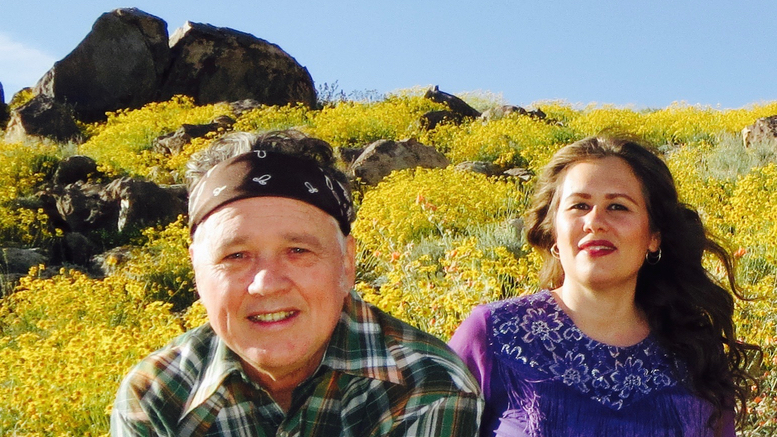 HAPPY RETURN: Mark Olson and his wife Ingunn Ringvold are preparing for their first Australian tour since their 2011 honeymoon.

WALKING around the Californian desert without an instrument writing songs might sound like a scene out of Oliver Stone’s biopic The Doorswhen Jim Morrison and the boys take an LSD exploration.

With the exception of the mind-altering substances, this was Mark Olson’s experience while writing his new album Spokeswoman Of The Bright Sunwith his Norwegian wife and musical partner Ingunn Ringvold.

The former Jayhawks songwriter and Ringvold live on an isolated property near Joshua Tree National Park. It was at home or on the porch where the pair recorded the album of Americana material live with eclectic equipment that included a ‘60s microphone rented from a music store and an Armenian kanun amplified through a delay box.

“When I write I go into a trance,” Olson said from his home in southern California. “I try to do my music and lyrics in a way that I’m working in my subconscious. I always go outside and write. I don’t write inside and I write a lot of the time without an instrument. I write in my mind and then I’ll sit down with something that’s in my mind and I’ll work with Ingunn or an instrument.”

Spokeswoman Of The Bright Sun, due for release on August 25, is the second album the couple have recorded together. It follows 2014’s Good-bye Lizelle. Olson, 55, said Ringvold has brought a new motivation to his songwriting.

“She brings the sense in me that I want to do it in a unique and satisfying way again,” he said. “I want this to be the time that I achieve my best music with her.”

LEGEND: Mark Olson has carved a legacy in alt-country through the bands The Jayhawks and The Original Harmony Ridge Creekdippers.

Despite Olson’s pride in his wife’s musical prowess, the album title does not refer to Ringvold. It’s an ode to California, a state which rescued him from his traumatic teenage years in Minnesota, following the death of his father at 13.

“California is a land where you can live your dreams and I’ve always to tried to do that and my life always went so much better in California,” he said.

“Moving to the desert there’s an incredible amount of sunshine and I just started to feel like there’s some spokeswoman of the sun talking and helping me with things that are important in life. Your destiny and things like that.”

Mark Olson and Ingunn Ringvold play Dashville Skyline on September 29 to October 1 and perform at the Northern Star Hotel and Grand Junction Hotel on September 23 and 24.