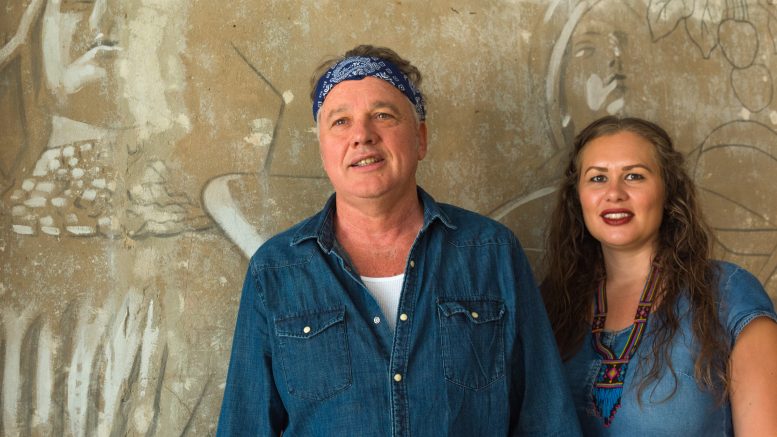 Mark Olson led the influential country rock band The Jayhawks through the ’80s and ’90s but his most recent music has grown in a more worldly and psychedelic direction.

Olson, a Minnesota native, and his Norwegian wife Ingunn Ringvold performed an intimate 80-minute, 17-song set Wednesday night at the Red Herring Lounge in Duluth. The performance mixed a handful of classic Olson-penned Jayhawks songs with a heavy helping of music recorded in the last three years with Ringvold in the California desert.

While the Jayhawks mastered an alternative country sound pioneered by Gram Parsons, Emmylou Harris and the Eagles, Olson and Ringvold are going after something very different.

“We have a number of different soundscapes we’d like to present tonight based on our time in the desert,” Olson told an attentive audience of about 25. “This is music influenced by what’s around us, the natural, the environmental and the economic.”

Olson said much of his writing was inspired by old beatnik poets who live around their hometown of Joshua Tree, Calif. “The music and lyrics come from 1957 and we updated the sound to 1967,” he said.

Instead of traditional country trappings like the fiddle, lap-steel and drums, the couple used an African djembe drum, an old-timey dulcimer, Mellotron keyboard and an Armenian qanun. The instrument collection created an intriguing blend of raw American folk, trippy 60s harmonies and laid back world music.

One thing that hasn’t changed from Olson’s performance is harmony.

Back in the day, Olson laid a heavy, soulful vocal foundation while Jayhawks guitarist Gary Louris provided the soaring side trips. Olson is still the heavy but Ringvold provides a bolder, brighter twist – sounding like Linda Ronstadt if she had been raised on lutefisk and krumkaker.

The vocal harmonies shined brightest on the new material. Opening with “Seminole Valley” off their new record, the song bounced along to bongos and Olson’s reverb-drenched electric guitar.

Ringvold planted the qanun on her lap for “Spokeswoman of the Bright Sun.” The exotic instrument looks like a large, triangular piece of Lake Superior ice and sounds like a cross between a harp and a toy piano. “I like going where you’re going and doing the things you like to do,” sang the couple. Images of mountain springs and purple sage filled the song.

Nature was a the biggest theme of the night.

Using an Arkansas dulcimer “tuned 11 steps down,” Olson banged away on a song called “Poison Oleander” and played a Stratocaster upside down during another called “”Go-Between Butterfly.” The songs felt comforting and transporting as snow piled up around East First Street parking meters outside.

After a new song called “Black-Eyed Susans,” Ringvold produced a large photograph of the two sitting on a rocky hill covered with bright yellow flowers. She explained California experienced a rare “super bloom” this spring.

“It was really hot,” she said, winning a laugh from the audience with coats draped over their chairs. “We took a lot of pictures and made some videos.”

Olson and Ringvold released the full-length album “Spokeswoman of the Bright Sun” earlier this year and have toured Norway, the United Kingdom and Australia in support of the record.