This is music that will speak to you about things that have happened! An album that sounds like you are alone in the desert all by yourself. Remembering childhood experiences and musical instruments and all the joy that took place. We have forgotten because of terrible things that have happened. Is it the truthfulness that attracts you to this music? Listen out of time: Mark Olson & Ingunn Ringvold are singing ‘Spokeswoman of the Bright Sun’, the follow-up of the critically acclaimed Alternative Country/Americana masterpiece ‘Good-bye Lizelle’ (Glitterhouse Records, 2014).

“Our album was recorded during a Joshua Tree summer basically inside our cabin/home but sometimes outside on the porch,” says Mark, “it was warm and I was making a lot of strange ice teas, brewing recipes that came from an herb book I had bought at the local thrift store. We went right from writing, to rehearsal to recording in the May, June and July time period and I think that is the secret to making a unique album, keeping the momentum of the writing and part learning of the song as you move towards to final takes. The recording sessions with Danny Frankel (drums) took place in the morning before the Mojave heat was on. Danny lives nearby and has developed his own language via his beat communiques (a type of tambourine Esperanto). We were able to go back over some of the grooves and try different approaches and some of the songs just worked on the first couple of takes. Later that summer we visited with Lewis Keller (bass) in his home in Colorado. We had a time and rather than show him charts and such we went on and on about the themes and significance of each song and how it relates to the recorded folk-rock legacy on certain albums stuck in time. The writing of the music for this album is the desert I long to return to, this valley of string sounds is where I really want to be and what takes up the most time in my heart. The remembering of how I was just a young teenager driving up Topanga Canyon with my Aunt to a bluegrass festival. The sounds of banjos in the Santa Monica Mountains and the beautiful outdoors. That is why now I write mostly outside, under an old Siberian Elm tree that is home to a colony of Bumble Bees. Wow! Look Out! They buzz me on occasion and also just float above my head, hovering in a curious way like some natural apis blimps sent out to observe my lonely work!”

Ingunn Ringvold – Mark’s wife and musical partner in life and music – comes from Norway, the home of Thor Heyerdahl, the explorer of Easter Island and Kon Tiki raft author. She has been singing in public since she was a very young person. Her voice is one of natural beauty. Ingunn is honest, trustworthy and strong. She hears music in her heart and writes emotionally dramatic and moving string arrangements. She plays the Armenian Qanon. She studied with Arax a very well established Qanon master from Vanadzor, Armenia. In Vanadzor she learned how to harness great strength in her performance style. Ingunn also plays the keyboards, djembe, guitar and dulcimer.

“Composing and arranging for ‘Spokeswoman of the Bright Sun’ was one of the most joyful experiences of my recording career,” Ingunn recalls, “I’d bought a Mellotron from Stockholm that I was very excited about, every different string arrangement was like a different color in an impressionistic painting, I was able to incorporate from my musical heritage, the hymns and the folk songs of my Grandmother, to my own style of minor and major walking hand in hand. Working with Mark’s original material and unpredictable chord progressions has been the highlight of my musical journey, it’s like I’m standing in the desert holding a gemstone in my hand”.

All original track recordings were made with a Nagra field recorder. These tracks were delivered to John Schreiner for mixing and mastering. This is the moment a rainbow came into town. John has worked in some of the most important historically speaking and result speaking recording studios in Los Angeles. John worked with Hal Blaine in the past and in the present reinforced his studio sounds in San Clemente, CA with room sounds from studio 3 at Western Recorders. John mixes in groupings and the results are a new step forward in post-modern folk-rock sound exploration. Enjoy the warmth and spaciousness of these outstanding musical mixes!

Mark Olson was born and raised in Minnesota by a family of mostly farmers and school teachers. He has been involved with musical instruments since the age of twelve and is self -taught for the most part and uses alternate tunings and two-part unison singing followed then by breaking off into harmony in his writing and live performances. He lives now in the California Desert with his wife Ingunn Ringvold. Mark and Ingunn tour off and on internationally almost every year.

‘Spokeswoman of the Bright Sun’ by Mark Olson will be released by Red Eye Distribution August 25th in N. & S. America and Australia/NZ and Glitterhouse Records September 1st in Europe 2017 followed by extensive touring. 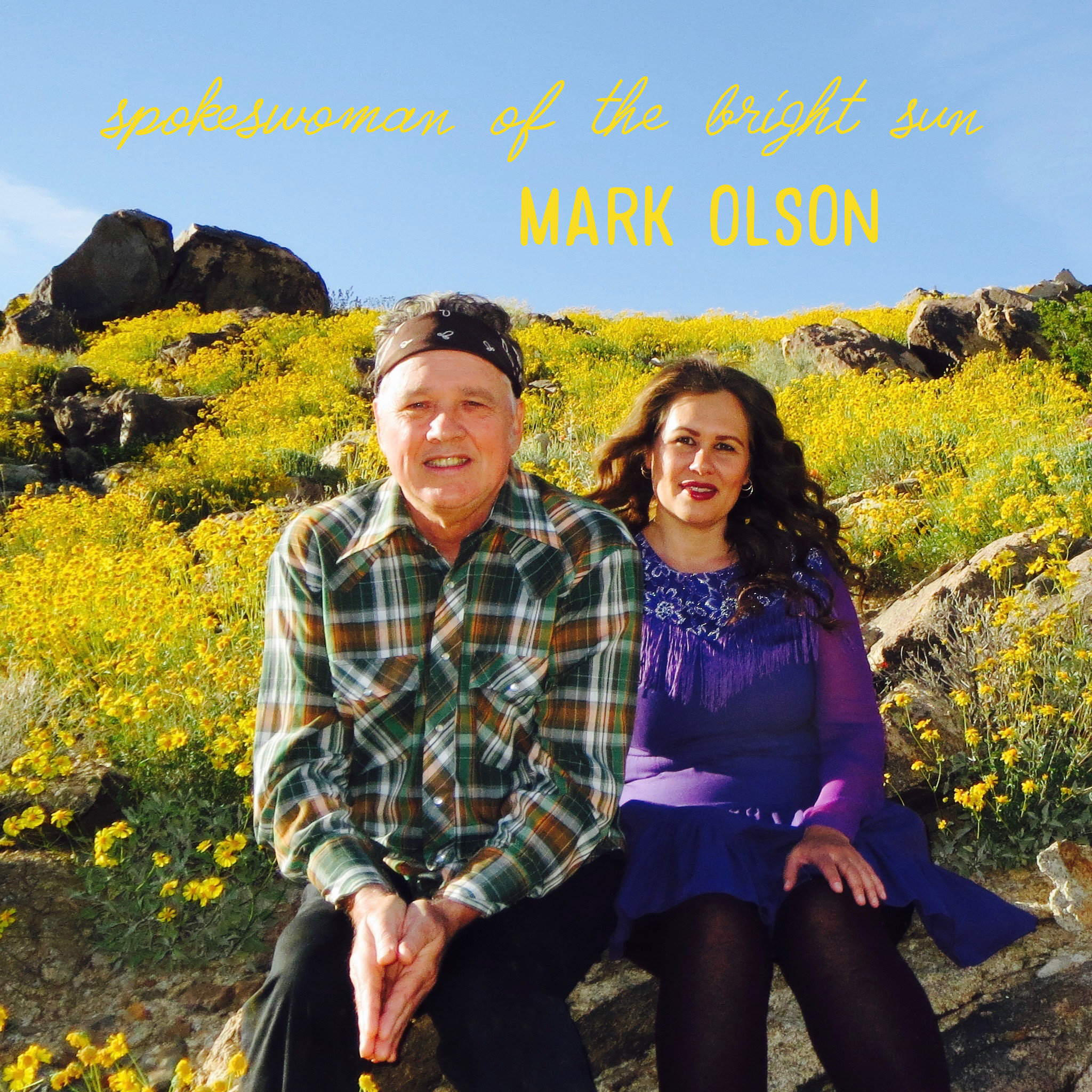 ‘An album of great warmth and intimacy …’ – RECORD COLLECTOR

“A significant, bold and beautiful record”

“Lizelle Djan combines non-mainstream instrumentation with a modern dramatic vocal. There’s a distinct flirtation with Eastern rhythms and vocal melody lines; ‘Running Circles,’ ‘Say You Are the River’ and ‘Jesse In An Old World’ float ethereally with ambitious complexity.”

“As a complete listening experience, it’s a little like being immersed in someone else’s dream;”

“Turn off all those modern telecommunications devices, throw away your me-machines, and bask in some old-school sound.”

“If you want things to be different, then you have to go out and do it yourself. Go plant yourself a field without genetically modified crops.”

“A deeply introspective set of songs, with a keenly spiritual undertow running through these meditations on love, nature, and humanity.”

“Vashti Bunyan adds pale backing vocals to ‘No Time to Live Without Her’ while ‘Beehive’s acoustic guitar/strings are Nick Drake from the prairie, battered by the wind.”

“The gorgeous ‘Beehive’ features Olson and his charmingly vulnerable voice backed only by acoustic guitar and a soaring string section. ‘Scholastica’ finds him ‘walking on the shores of goodbye,’ snarling and quivering like Young on After the Gold Rush. The reassuring arpeggios of ‘Wind and Rain,’ cruise smoothly beneath the angelic harmony vocals of Ingunn Ringvold.”

“Salvation Blues is the kind of contemporary singer/songwriter record that we need more of: poetry as part and parcel of life itself, captured in a music so utterly simple and convincing, it is almost impossible to separate it from the artist who made it — except that it recalls our own experiences so closely in places we have no choice but to give thanks“

“Their best record since 1999’s Zola And The Tulip Tree; rural folk, western swing and bluegrass still bubble with contentment. Neither restless nor self-destructive, the ‘Dippers are uniquely postmodern US roots musicians: it’s the sound of what happens once you’re done with the Great Lost Highway”

CREEKDIPPIN’ FOR THE FIRST TIME

“It’s testament to Olson’s understated genius that this collection of tracks from his first three albums with the (then called) Original Harmony Ridge Creedkippers really does blow away anything’ his former band have done.”

“Everything about “Creekdippin” feels as authentic, beautiful, unconventionally dazzling and poignant a collection of songs as you’re likely to hear from any artist in recent memory – and yup, that’s a bit overwhelming a description, but in this case it’s true – it’s that good a record.”

“Whether singing about around-the-clock meth labs or newspaper roses sold by the side of the road, he creates fully realized worlds within each song on December’s Child.”

“There are five of them now, these albums credited to a California desert aggregate called the Original Harmony Ridge Creekdippers -Five records in six years is a remarkable output in the modern-day music industry, but then the Creekdippers’ aim from the start was to work outside”

MY OWN JO ELLEN

“One of the very best albums of 2000, and one destined to be played for years to come.”

“Every cut sounds like an instant classic; and, like the songs of, say, the Band, they seem timeless, as if they’ve been around for ages.”

ZOLA AND THE TULIP TREE

“Before closing out this endearing disc with a plaintive love song, ‘Big Old Sign’, Olson puts on a formidable display of his singing, phrasing, and melodic skills on ‘Into The Yard’, inducing the listener to hang on his every word — and on the Creek Dippers’ every note.”

“Olson’s and Williams’ songs commemorate such common, everyday pleasures as a good rain and changing seasons. This is intimate music that recalls old-time traditions and manages to avoid the cloying earnestness that often afflicts folkies and unplugged rockers.”

“You’d swear in a blind listening test that these were old field recordings. Olson cites early Holy Modal Rounder recordings and Lucinda Williams’ early Folkways work as seminal influences on the Creekdippers sounds, and it really comes across.”

“Indeed, the effortlessness of the music is so disarming that at first it almost seems too easy — until eventually it becomes clear that the sheer innocence is forging an irresistible emotional connection.”

“It’s the kind of music that’s impossible to strive for, to fashion from careful study or conscious effort; the only way it happens like this is when it flows straight out from the soul.”