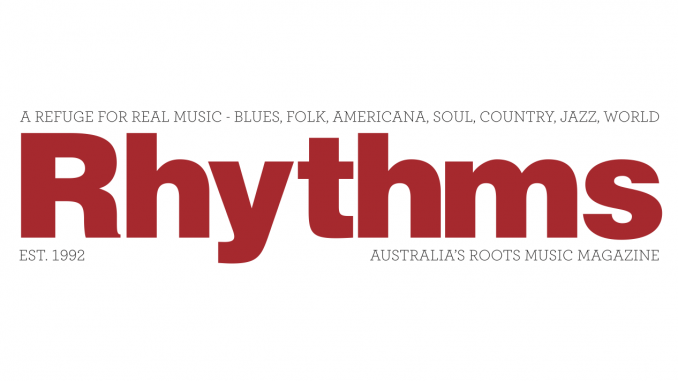 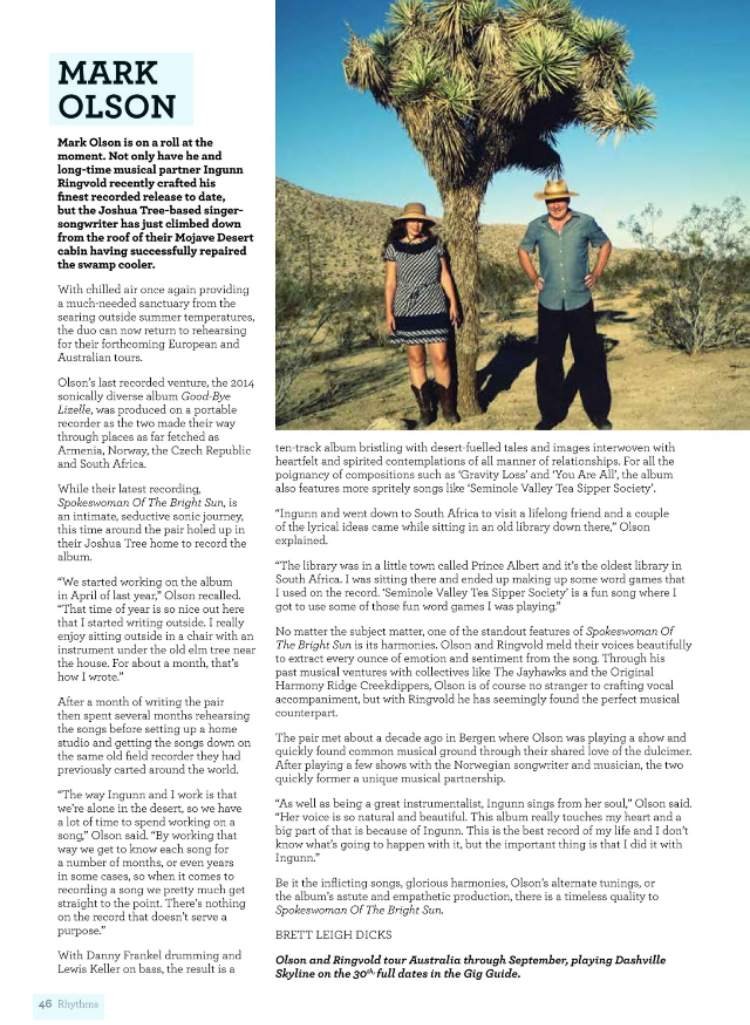 Mark Olson on recording independently, discovering a new sound, and his grandmother.

It’s mid-afternoon in the Californian desert when Mark Olson calls from his Joshua Tree home.

He and his wife, Norwegian multi-instrumentalist Ingunn Ringvold, have just turned off their ‘swamp cooler’ – a kind of moist air conditioner for dry climates – so it doesn’t drown out their voices. It’s become a ritual for the couple, who’ve just recorded their second album, Spokeswoman of the Bright Sun, in the very same room.

Olson found fame in the ‘90s as a founder of alt-country pioneers The Jayhawks, but the industry never suited the free-spirited singer/songwriter. In 1995, he unexpectedly quit to live in the desert, forming the Original Harmony Ridge Creekdippers. Now playing under their own names, the guitarist derives great contentment from living and working with his wife.

“It’s a wonderful thing working with your spouse,” he says. “The backbone of each town is having small businesses and most are run by a family. I don’t want to live any other way.”

Part of the couple’s business model is being able to record independently, which, in the absence of the financial support Olson enjoyed as a Jayhawk, means using a field recorder.”I love old studios,” Olson says. “I love all that stuff, I love really nice guitars, but I had to develop this whole thing of working on a Nagra.”

Luckily, Olson has a lot of experience making records on the cheap. “I’ve been working outside the music business almost my whole life,” he says. “I was out there in the late ‘90s, early 2000s. There was millions of grunge dollars in the business and I was making my Creekdipper records at home for three to four thousand dollars a record.”

Spokeswoman of the Bright Sun was made on a similar budget in two months using vintage ‘60s mics and preamps normally hired out as film props to movie studios. The title track – a beautiful, uplifting folk-pop number – features Ringvold playing the Armenian qanon (a kind of 77-string harp). An instrument she learned while the pair were doing charity work in Yerevan, Olson can’t help but be excited about its place on the album.
“We discovered this new sound and that’s on Spokeswoman,” he says. “We have the qanon and the delayed guitar playing off each other.” The song, like many in Olson’s catalogue, deals with the tragedy which defined his formative years. “We were living wild as children,” Olson says. “We were out playing at night, we were out running through the swamp and rivers and the woods and all of a sudden, when I was 12 years old, my dad died.”

The eponymous spokeswoman is Olson’s grandmother, who took him in and moulded him.

“She liked music,” Olson says. “She had records around there – she brought me into that place where I really wanted to play music.”

One morning, Olson sat under his favourite tree, penning songs for the new record. He looked up at the sun through the branches and realised his grandmother had been his representative of light and life. “She’s like a spokeswoman,” Olson says. “My life story is my grandmother. She came in and she grabbed me and I think everyone should have someone like that. You need someone like that.”

Olson’s grandmother would no doubt be proud that it’s Ingunn, and the little business they’ve built together, that consumes him. “What keeps me going is getting up and finding something new to be excited about every day with this group that Ingunn and I have,” Olson says. “This Ingunn, this wife of mine, is a supreme musical talent, and people are going to hear that.”